Yaron Raz Leaves a Mighty Legacy of Transformation and Growth

Yaron Raz believes his long and impactful career comes down to one word: love.

Raz, who retired in May as CEO of Beit Avraham, a senior living community in Haifa, Israel, ends a remarkable career where he sought out, championed, and delivered innovation in eldercare. It’s been no meager feat—and one filled with a lot of love.

A social worker by training, Raz led the Beit Avraham community for more than 27 years. In that time, he has developed an international reputation and made valuable connections with professionals across Israel and worldwide, enabling him to bring about radical changes in eldercare in his home country – while also expanding the Green House model’s footprint beyond the U.S.

Green House senior director Susan Ryan believes Raz leaves a potent legacy. She recounted how he reached out several years ago and asked to come visit her at The Green House Project’s office outside of Baltimore to learn more about the Green House model.

Raz had heard about the Green House model and the cultural changes surrounding eldercare in the United States, and it really resonated with him, she said.  He began a quest to learn more about the Green House model and modify it for use in Israel. Ryan was impressed with Raz’s ability to see the bigger picture and the courage he displayed to do something so completely different within Israel’s long-term care landscape.

Following his meeting with Ryan in Linthicum, Md., Raz received a grant to visit several member communities of the Association of Jewish Aging Services (AJAS) that adopted the Green House model. He was inspired to take what he learned and create a similar community in Israel. 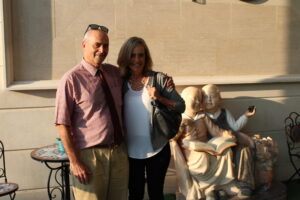 Ryan, who has developed a personal and professional relationship with Raz over the years, travelled to Israel for the opening of the modified Green House community at Beit Avraham and was blown away by the response Raz received at the event.  She said, “Yaron had done something that shook the industry up.”

Others in the field have praise for Raz, too.

“Yaron Raz is one of the smartest people I have known in my professional career,” said Don Shulman, president and CEO of AJAS. “His passion, drive, and spirit of enthusiasm for our elders is second only to his enthusiastic focus on innovation. As Yaron retires he will be missed by his peers.”

In a farewell letter to colleagues, Raz attributed his career to the residents of Beit Avraham and his associates in long-term care.  He wrote of the great honor he felt and how much he learned. “I send you my heartfelt thanks for the smile, love, sympathy, support and goodwill you have shown toward me,” he wrote.

As a proponent of an empowered workforce, Raz also saluted the caregiving workforce in his letter. “You ordinary workers, my beloved colleagues, have a special place in my heart,” he wrote. “Thanks to the way you carried out your hard and challenging jobs.”

Talk about a class act. The Green House Project would like to acknowledge the leadership, commitment, and vision of Yaron Raz and his groundbreaking work in Israeli long-term care. We wish him and his family much health and happiness in the future. We also want to wish him a hearty yasher koach, a Hebrew term meaning a job well done.