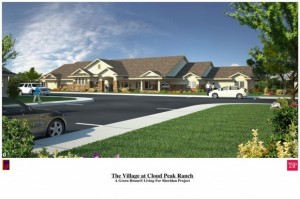 An artist's rendering shows The Village at Cloud Peak Ranch, which is where the Sheridan Green House project will be located. Officials are hoping it will open by Christmas.

Wyoming’s first Green House will be the only grassroots Green House in the nation.
Elsewhere, Green House projects have been sponsored by established groups, including religious organizations. Sheridan’s project came from within the community and has received heavy financial support from Sheridan residents and organizations.
Additionally, while other projects incorporated the Green House concept into existing nursing homes, Sheridan’s is a stand-alone project.

It wasn’t easy. Sheridan officials and residents had to fight for support from the state legislature, secure matching grants, a federal loan and $3 million in donations to make the project possible.
Building a Green House Project home without the resources and backing of an existing long-term care organization is an extraordinary accomplishment by the community of Sheridan, said Green House Project founder Dr. Bill Thomas. But it’s exactly what he envisioned when created the concept.
Thomas’ book “What are Old People For? How Elders Will Save the World,” outlines The Green House Project model and includes the concept of “intentional” Green Houses created at the community level.
“Sheridan is proving that people can come together and create intentional homes that will eventually replace the traditional nuring home,” Thomas said. “When the world finds out what Wyoming is doing without the backing of a big nursing home operator it will send shockwaves through the long-term care industry.”

Subscribe to our newsletter below to get news every other month from The Green House Project in your inbox.

Subscribe to our newsletter below to get news every other month from The Green House Project in your inbox.